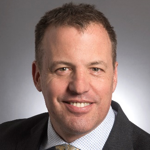 He and his wife Kristine with their five children live in Mendota Heights. Klein graduated from the University of Wisconsin-Madison and completed his medical training at Mayo Medical School in Rochester. He recently transitioned from a provider role at Hennepin Health to Mayo Clinic.  Klein has worked as a medical doctor for 20 years during which he also served on the Board of Directors of Dean Medical Systems. He served on the West St. Paul-Mendota Heights-Eagan school board from 2013-2016. During his time on the school board, the district opened an early learning campus, academic achievement improved, and he helped pass the first pollinator-friendly resolution by a school district in Minnesota.