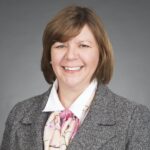 Elizabeth Delahoussaye is Chief Privacy Officer for Ciox Health. Elizabeth has served on the AHIMA Board of Directors and was the Speaker of the House of Delegates in 2016. She has also served as a representative for THIMA on the AHIMA House of Delegates, as well as President-Elect and President for THIMA from 2008 thru 2010. Elizabeth has served on various committees at the national level with AHIMA as well, including co-chair for the AHIMA ROI Tool Kit in 2013, the AHIMA Annual Program Committee in 2014 and 2015, and AHIMA’s Privacy and Security Council from 2017 to 2019. In 2013 she received the THIMA Distinguished Member Award for serving and volunteering over the years on both the state and national levels. Elizabeth resides in Knoxville, Tennessee with her husband John, and her son Adam.

Do you have questions?

Get Your Questions Answered

Find What You Need